Guidance on benefit eligibility as businesses start to reopen in California

Sacramento – Applications for unemployment benefits ticked down slightly as total benefits paid since the start of the COVID-19 pandemic soar past $30 billion, according to the latest weekly statistics released by the California Employment Development Department (EDD) today. The EDD processed another 312,791 claims last week alone between regular Unemployment Insurance (UI) and Pandemic Unemployment Assistance (PUA) programs totaling now more than 6.3 million claims since the sudden surge of the pandemic began in the week ending March 14, 2020. 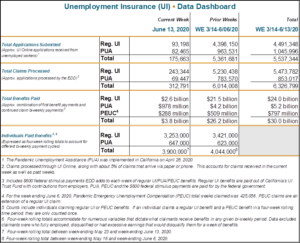 Guidance for workers and employers as businesses start to reopen

As businesses start to reopen in California under the state government guidelines, the EDD has developed a series of FAQs on our COVID-19 webpages to assist workers and employers in understanding impacts on the eligibility for UI benefits. If individuals collecting UI benefits are offered the chance to return to their jobs and refuse that opportunity, they will need to report this information on their bi-weekly certification form in answer to question #4, “Did you refuse any work?“ A refusal to work legally requires an EDD representative to review the case and follow up for more information from the claimant as well as the employer before determining whether the claimant can continue to receive unemployment benefits.