From WWII to the Northridge Earthquake: Retired LA Battalion Chief Remembers Moments of His Storied Career

Retired Los Angeles City Fire Battalion Chief Larry Schneider’s long and storied career began during World War II. He didn’t retire until 2007, just shy of his 80th birthday; he says he could have performed his job well for another five years but felt it was time for him to settle down.

We met Mr. Schneider at his home in the hills of LA and spent a wonderful afternoon talking with him about everything from the early days of his career to the Northridge Earthquake. Take some time to listen to his stories and then check out the links below for some really great photos from his past. 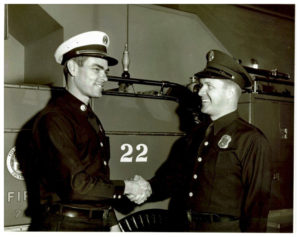 Click here for the story of how Larry Schneider’s life was saved, and the great photos of the scene and his hero afterward.
http://www.lafire.com/stations/FS022/1964-1125_1110W55thStLA-Fire.html

Click here for historical photos of Schneider and his station.
http://lafire.com/stations/FS033/FS033_1971-present.htm