Last week the EDD paid an average of $686 million a day in benefits – about $600 million more than the daily average paid at the height of the Great Recession ($86.9 million during the same week of 2010). Over the last few weeks, about half of the claims for regular UI come from re-opened claims. These are claims when someone stops certifying for benefits for a while and then later comes back to their claim to collect further benefits. 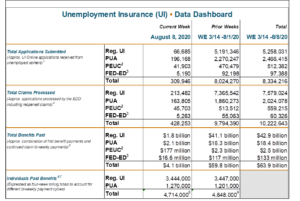 The EDD is working closely with state and federal partners to assess the implementation of the Presidential Memoranda on lost wage assistance for eligible claimants.

Claimants with any eligible weeks of benefits between March 29 and July 25, will receive the prior $600 stimulus payments, even if those payments are processed at a later date.

Without the stimulus payments, claimants will still receive the weekly benefit amount they qualify for on their regular UI, extension, or PUA claim. Those weekly amounts range from $40 – $450 a week for regular UI and from $167 – $450 for PUA, depending on income earned previously.

The EDD continues to take action to assist claimants during this unprecedented pandemic, including expanding the amount of time available for a claimant to submit a certification for benefits from the prior 21 days after the claim is processed to now 120 days. This additional time will help claimants certify for their first payment, as well as for continuing payments every two weeks. Such an effort addresses more than 500,000 claimants that a recent EDD analysis shows have not taken the necessary action to certify eligibility for payment.

While some claimants will never certify for payment for one reason or another (i.e. they’ve returned to work), the EDD has taken steps to help claimants with certification when they do want benefits, including:

Other developments to enhance customer service so far include: