The U.S. Environmental Protection Agency (EPA) and the State of California Department of Toxic Substances Control (DTSC) have cleared household hazardous waste from more than 99 percent of properties in the Town of Paradise and Butte County as part of the Camp Fire response effort.

The remaining properties will be cleared of household hazardous waste by DTSC during the second phase of the cleanup process.

“EPA’s strong partnership with the State of California, Butte County and local officials helped expedite this critical first phase of the Camp Fire recovery,” said Mike Stoker, EPA’s Regional Administrator for the Pacific Southwest region. “We are honored to have contributed to these efforts and hope the community can move toward the next phase in the cleanup process.”

“California once again demonstrated that our collective resources and resolve can meet the challenges posed by unprecedented wildfire activity,” said Meredith Williams, Acting DTSC Director. “To have completed the cleanup of thousands of homes and businesses impacted by the state’s wildfires in under nine weeks is a significant accomplishment and speaks to the strength of our partnerships and our commitment to the safety of the survivors of these devastating fires.”

“In the face of the most destructive wildfires in California history, local, state, and federal partners mobilized in a swift response to stabilize the situation and begin the recovery process. Collaboration between the EPA and DTSC is a prime example. Tireless work over the past two months led to the completion of phase one ahead of schedule,” said David Samaniego, FEMA’s Federal Coordinating Officer. “We will continue to present a united front and support survivors every step of the way.”

“The completion of Phase I recovery operations ahead of the estimated timeline is a testament to our multi-agency coordinated efforts,” said Mark Ghilarducci, Director, California Governor’s Office of Emergency Services. “Together, we have successfully supported survivors and will continue that support throughout the recovery process.”

During the first phase, which began on December 3, 2018, EPA and DTSC cleanup crews assessed and removed household hazardous waste from over 13,000 fire-damaged properties. These wastes included paint, solvents, pesticides, fuel, batteries and other combustible items. The California Department of Resources Recycling and Recovery (CalRecycle) will begin removing solid waste, debris and ash in the affected areas during the second phase.

Approximately 50 properties were marked “No Access,” meaning crews could not enter the property due to a locked gate or fence, a property owner who denied access, dangerous trees or terrain, unstable structures or other unsafe conditions. DTSC will continue to work in the Town of Paradise and Butte County on those properties.

Although the majority of household hazardous waste has been removed during the first phase, some items may remain and will be removed in the second phase. Ash and other materials should not be disturbed.

Those who have questions about household hazardous waste removal or the second phase of the cleanup should contact the State of California’s Debris Removal Operations Center at 530-399-0434. EPA’s hotline is no longer operational. 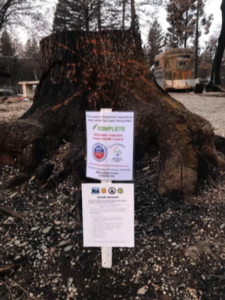 Phase 1 Completion sign and information from Butte County posted on a property.

Household hazardous waste includes, but is not limited to, common items that may be corrosive, toxic or flammable. Products such as paints, cleaners, solvents, oils, batteries, herbicides and pesticides can contain hazardous ingredients. Following a fire, these items require special handling and disposal, especially if their containers have been compromised.

For additional information on the Camp Fire response and recovery, please visit: ButteCountyRecovers.org