Perry Sworn in as New Cal OES Chief of Staff

Prior to his appointment, Perry has been an adjunct professor at the Pepperdine University School of Law since 2018. He was counsel at Wilmer, Cutler, Pickering, Hale and Dorr LLP from 2014 to 2018, an Assistant U.S. Attorney at the U.S. Attorney’s Office, Southern District of California from 2008 to 2014, and an associate at Sheppard, Mullin, Richter & Hampton LLP from 2007 to 2008. Perry served as a law clerk for the Honorable Peter W. Hall at the U.S. Court of Appeals, Second Circuit from 2006 to 2007. He is also a member of the Earthquake Authority Advisory Panel. 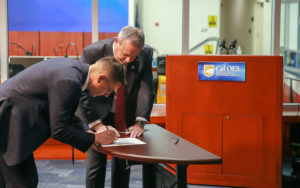 Cal OES’ mission is to protect lives and property, build capabilities, and support communities for a resilient California.