California has not been alone in feeling the intense effects of global climate change. In recent years, wildfires have captured the headlines and the record books across the Western United States, as well as in the Southern Hemisphere. In 2016-17 alone, Chileans saw a massive spike in wildfires as more than 547,000 hectres (1.35 million acres) burned across the most latitudinal nation in the world.

This year, Oct. 2 was the official start of wildfire season in Chile as the warmer months begin and the Northern Hemisphere begins to cool. The initiative is known as Plan Nacional de Incendios, very similar to California’s Ready for Wildfire campaign spearheaded by CAL FIRE. In Chile, wildfires are more common between November and March for much of the forested and woodland interface areas of Chile.

CONAF is the country’s equivalent agency to CAL FIRE, as the state fire department, and ONEMI is the Chilean equivalent of Cal OES, as the Chilean government agency for coordination of all disaster response and emergency management. Invitees to the first-ever workshop included communications leadership from CONAF, ONEMI and each of the 15 regions of the Chile. A key motivation behind the workshop was increasing operational and communication capabilities of both government’s response to catastrophic events, such as earthquakes, megastorms, tsunamis and wildfires.

During the workshop, Cal OES and CAL FIRE provided an overview of California’s wildfire response and preparedness campaign strategies in emergency management, as well as case studies in collaborative, transparent communication during disasters. Following the workshop attendees will be hosting several virtual coordination meetings to discuss further advanced crosstraining opportunities for crisis response staff in the future in California, Chile and beyond. 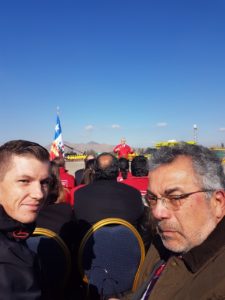