Today, California Governor’s Office of Emergency Services (Cal OES) Director Mark Ghilarducci officially swore in Brian Marshall as the new Fire and Rescue Chief. He was appointed to his new position in December.

Chief Marshall will be replacing Kim Zagaris, who announced his retirement in 2018. Zagaris was appointed as the Fire and Rescue Chief on April 1, 2001. 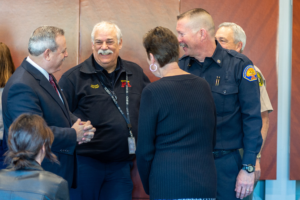 Prior to his appointment, Chief Zagaris was the Assistant Fire Chief for Cal OES with assignments in Region I, II, III, IV and V since 1987. He started his career as a Comprehensive Employment and Training Act (CETA) seasonal firefighter in 1977 and promoted through the ranks of the local, state and federal fire agencies to the State Fire and Rescue Chief. His extensive background in fire service, emergency management, and homeland security included working with local, state, federal and international agencies over the last 40 years.

Chief Zagaris was responsible for several major program elements including the day-to-day management of the California Fire and Rescue Mutual Aid System, which includes more than 1,100 fire agencies and about 55,000 professional and volunteer firefighters that operate approximately 6,000 fire engines statewide.