The Challenge is People, The Reward is People

This episode (#18) Cal OES Deputy Chief Paul Tassone sits down at the mic with us. Chief Tassone is going on his 34th year in law enforcement, and his 6th with Cal OES. His career began with a tour of duty in Air Force when he got out of high school. While in he received medical training and when he got out he began working as an EMT2 while going back to school. It was during that time he became interested in law enforcement. He attended the Sacramento Sheriff’s Academy in 1982 and spent the next couple of decades working his way up through the ranks, working closely with emergency management, until landing at Cal OES in 2011. He’s now deputy chief, administration. A self-proclaimed adrenalin junky, he loves working with emergency services and the people in that community.

Chief Tassone talks about how much he relies on technology and is especially impressed by modern mapping systems and their use during search and rescue missions – satellite trackers and real-time feeds from air to ground to help direct crews with pinpoint accuracy even at night. To see an example of that technology, click this link to watch a story that also includes night vision goggles and helicopter demonstrations (the monitoring is at the end of the video.) 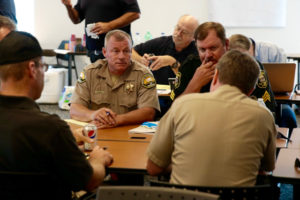