Dealing with disasters such as wildfires, mudslides and earthquakes are generally associated with the California Governor’s Office of Emergency Services (Cal OES).  However, when it comes to the disastrous effects of flammable or poisonous materials that endanger life and the environment, Cal OES is equally prepared.

With incidents involving events such as oil spills from gas pipelines or railroad lines, or the release of toxic substances such as chlorine gas from a chemical plant, the quickest possible response is essential to mitigate the impact on life, the environment and property. 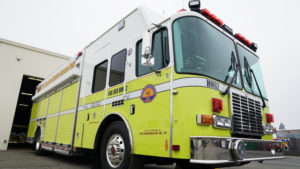 This fleet currently consists of 12 engines that were transferred in pairs to each of the six CalOES regions throughout the State. They are strategically placed to ensure that jurisdictions that were void of resources have a hazmat response team available. 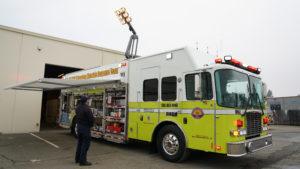 The first Cal OES Type II Haz Mat vehicle was transferred to Contra Costa County Fire Protection District in late April.  This one hazmat vehicle has responded to more than 40 Haz Mat releases that include a leaking rail car, overturned tractor trailer vehicles, and Haz Mat releases from large fixed facilities such as oil refineries. The latest transfer was Cal OES Haz Mat 62 this past Tuesday to the San Bernardino County Fire Department.

Cal OES has trained 17 personnel from each jurisdiction to the level of Hazardous Materials Specialist with an Assistant Safety Officer certification which is the highest level of training without the WMD certification. According to Charles Tobias, Assistant Chief of Special Operations & Hazardous Materials for Cal OES, “never before in our nation has a state attempted to distribute this many hazardous materials vehicles to our communities.”  Chief Tobias further explains that “although all states have hazmat releases, those states normally don’t supply the response vehicles and those that have, never deployed this many and none have attempted to deploy this many one time.”