Adventist Community Services (ACS), the humanitarian agency of the Seventh-day Adventist Church, has been involved in disaster response since 1874. At the end of June, with the additional financial support of the Adventist Development and Relief Agency (ADRA), they distributed approximately 100 kitchen supply kits to Camp Fire survivors recently placed at group housing sites located in Yuba City, Orland and Oroville. The 84-piece kits assembled by ACS included items such as dinnerware, glassware, pots and pans and various cooking utensils. Also included were kits containing other essentials such as laundry baskets, toilet plungers, towels and mops donated by St. Vincent de Paul. Families who have pre-registered with the non-profits are given first priority.

In the days following last November’s devastating wildfires that affected northern and southern California, ACS anticipated the need for what they call “living kits.” The intent was to distribute these kits to the possibly thousands of families expected to fill the various housing sites to be built under the auspices of the Federal Emergency Management Agency (FEMA) and the California Governor’s Office of Emergency Services (Cal OES). Charlene Sargent, Director of Disaster Response for Adventist Community Services, was in Butte County at the time of the wildfire and recalls that seeing the numbers of destroyed homes and displaced families rise so dramatically made her contemplate the eventual scale of that need. 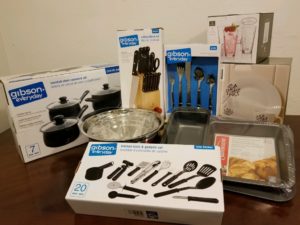 Her first question, particularly with regard to the survivors of the Camp Fire, involved what these kits should contain. Ms. Sargent started by thinking about what people need most when moving into a mobile housing unit or travel trailer provided to them by FEMA and she began to identify the gaps in what had already been donated. She decided that the biggest gap, and possibly the most important need, was in kitchen supplies. Her belief was that “providing the survivors with the ability to cook and prepare their own meals would begin to restore a sense of normalcy and be a significant step forward in a long and difficult healing process.”

By mid-December, Sargent made her funding proposal. She received those funds within six weeks and immediately began ordering the individual items and assembling the kits. The next step was to find a place to store the supplies while waiting for the housing sites to be built and for the surviving families to go through the licensing process and start moving into their temporary homes. This came in the form of a FEMA staging area that the federal agency allowed ACS to use until distribution could begin.

Unfortunately, obtaining the necessary funding to purchase these items and store them were not the only obstacles ACS needed to overcome. The organization itself had been severely affected by the wildfire. The Adventist Health Feather River Hospital, Paradise’s largest employer, was sufficiently damaged so that its 1300 employers were laid off with no specific plans to reopen. In addition, their K through 12 school was partially destroyed along with their church, which was completely destroyed. Furthermore, many of the volunteers they typically relied upon lost their homes and were themselves survivors. Nevertheless, by February of this year, Ms. Sargent managed to acquire enough supplies, along with six pallets of additional items from their partner organization, The Society of St. Vincent de Paul, to fill two 53 foot-long trailers that were stored until last weekend when they were finally distributed with the help of Adventist volunteers from nearby communities.

Camp Fire survivor Kevin Ciotta had been living at the Rosewood Mobile Home Park in Oroville for almost two months. He’s grateful that the kitchen kits will help his family to continue what is becoming a welcome tradition. “Since we’ve moved in, our family has been sitting around and eating at the table again.” Ciotta added that, “One of the things we’ve always encouraged is for everyone to sit at the table and talk about their days to see how things are going.”

For Charlene Sargent, this is exactly what she hoped to see happen. “It’s wonderful for us. We hate to hear of people losing their homes, but it really gives us a good feeling when they’re so happy and appreciative of the things we’re able to do for them.”

Although everyone at the Roseville site is grateful to have a roof over their heads and to have received the donations from ACS, Rose Butler, who has been living there with her cat for about a month, is looking forward to all of this being behind her. Butler says, “[She’d] like to be able to go home. But that’s not feasible. But it’s good right now. That’s all I know is I can take only one day at a time.”

ACS plans to distribute the remainder of the kits they have assembled to the other group housing sites. Tentative dates are being considered toward the end of July and again in mid-August. These dates will be announced when they are finalized.