A lightning strike, an unattended campfire, or an improperly disposed cigarette are just a few of the ways a major wildfire can begin.

It’s important for Californians to get a head start on preparing for the upcoming wildfire season. Statewide, Wildfire Preparedness Week – May 2-8 – provides tips for getting your home and family prepared for a wildfire. 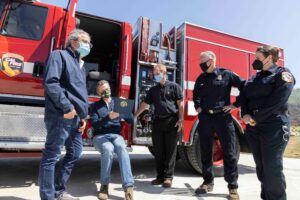 Part of the monumental wildfire package emphasizes the importance of Home Hardening, which helps increase your home’s likelihood of survival during a fire. Flying embers can destroy homes up to a mile away. Home Hardening focuses on securing the most vulnerable parts of your house – re-roofing with fire-resistant materials like metal, clay, or tile; covering vents with metal mesh so embers can’t get through the openings; and clearing brush around and under outdoor decks.

Home Hardening also means creating defensible space around your home to better prevent fires from jumping to your property and burning through dry brush and materials.

FIRE ENGINES IN YOUR REGION

In advance of wildfire season, the Governor’s Office of Emergency Services (Cal OES) strategically places fire engines in areas where the fire danger is high and in communities needing it the most.

In 2020, 131 Cal OES engines and 317 local government engines were moved to regions to support firefighting efforts and all-risk events.

Already in 2021, 50 Cal OES engines and 40 local government engines have been moved to regions in advance of the wildfire season and all-risk events.

Cal OES filled more than 12,500 requests for local government fire engine support in 2020 and more than 6,000 appeals for staff support.

For more tips on being wildfire ready, visit ReadyForWildfire.org.