Funding is now available for two first-in-the-nation campaigns that seek to protect Californians most at risk of fires, floods, earthquakes, and other natural disasters

MATHER, CA – As part of California’s nation-leading effort to build community resilience among vulnerable individuals living in the areas of the state most susceptible to natural disasters, the California Governor’s Office of Emergency Services (Cal OES) today announced the release of $125 million in new funding for local partners.

The two programs launched today, Listos California and Prepare California, work in tandem to prioritize new actions that advance equity for communities that have historically been underserved or disproportionately affected by disasters. Listos California is a $25 million campaign to utilize peer-to-peer education and outreach through community-based organizations. Prepare California is aimed at reducing long-term risks of disasters by investing $100 million in infrastructure improvements for local communities.

“Californians can expect more climate driven disasters in the years to come, but these problems won’t affect everyone equally,” said Cal OES Director Mark Ghilarducci. “These two campaigns allow us to build readiness and protect lives by investing in the areas where it is needed most.”

The funding allocated through these campaigns is intentionally designed to be people-centered and people-powered, with state funding flowing out to local community groups whose leaders and members know best how to reach their vulnerable communities.

Administered by Cal OES, Prepare California and Listos California will provide disaster resilience funding for communities that are the most socially vulnerable and at the highest risk for future emergency events. These programs identify their target service areas according to their estimated hazard exposures and social vulnerability, then based on those locations, partners can apply for funding to implement local projects and outreach efforts.

“We need more focus on building resiliency within California’s most vulnerable communities for the destructive and deadly wildfires ahead. We’re empowering non-profit organizations and emergency responders to work together to prepare for emergencies because California is at its best when we look out for each other,” said Governor Gavin Newsom during the initial launch of the Listos program in 2019.

Approved in Governor Newsom’s 2021-22 State Budget, Prepare California and Listos California will engage a network of partners, including Tribal Governments and community-based organizations (CBOs), to work together to ensure communities are prepared in advance of the next emergency. 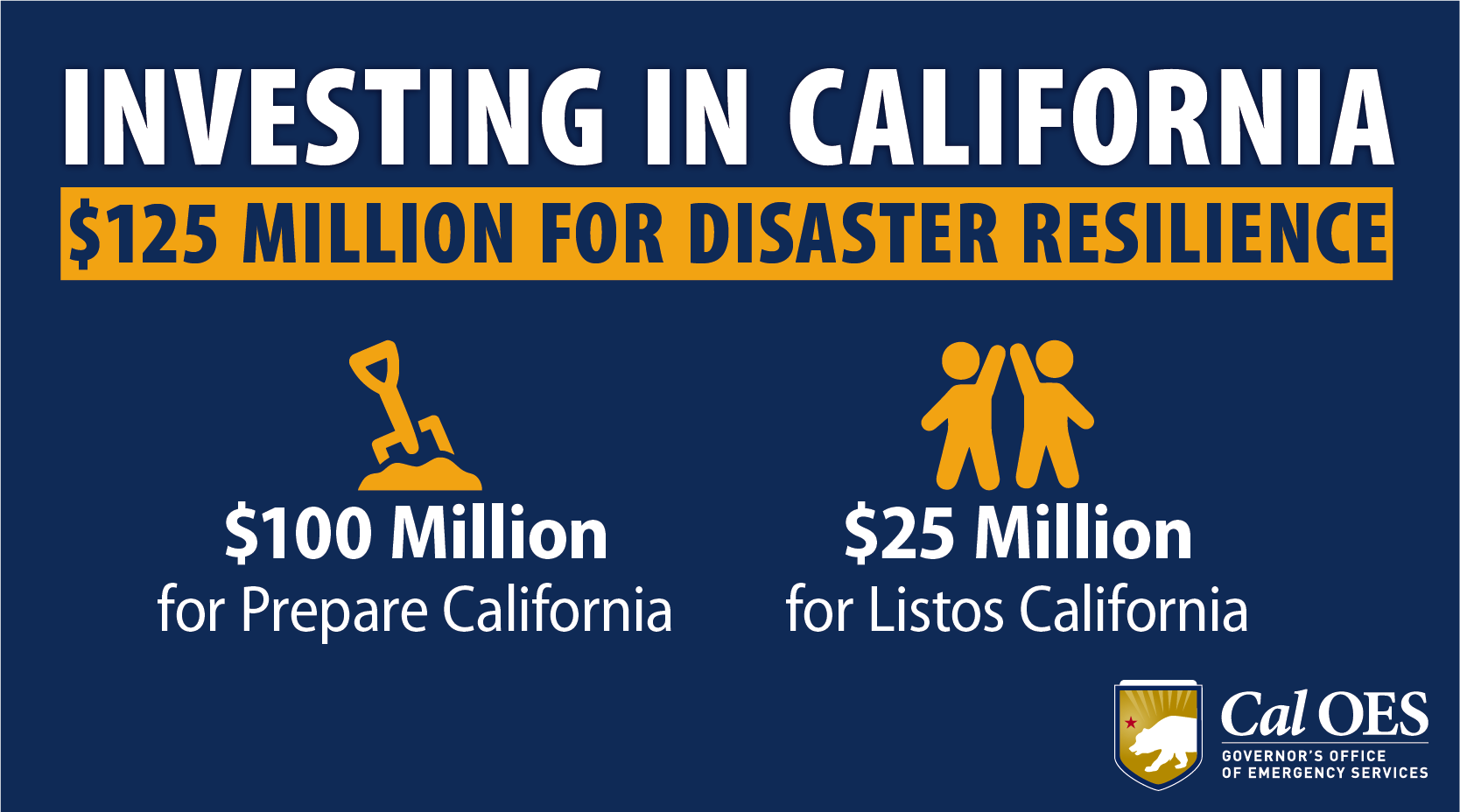 Prepare California is aimed at reducing long-term risks of disasters, such as flooding, earthquakes, wildfires, landslides, extreme heat, drought, or dam failure by investing in infrastructure improvements designed to protect communities. In addition, it is designed to unlock federal matching funds for community improvement projects that vulnerable communities would otherwise be unable to access.

For more information on eligibility and how to apply, please visit: caloes.ca.gov/preparecalifornia.

In 2020, the Listos California Grant Program awarded $20 million in grants and successfully partnered with over 300 CBOs and volunteer and service teams. The campaign surpassed its 1-million-person goal and reached over 3.8 million Californians effectively helping to combat issues relating to housing, food insecurity, and public health. This year, the campaign aims to take this a step further by not only focusing on preparedness, but also response and recovery efforts after disaster strikes.

These grant funds help engage a statewide network of CBOs, Tribal Governments, and others to increase communities’ disaster capabilities.

For more information on eligibility and how to apply, please visit: https://news.caloes.ca.gov/listosca2022.