As the state gears up for the 2021 wildfire season, the California Governor’s Office of Emergency Services (Cal OES) continues its mission to support local fire agencies by assigning them fire resources to respond to emergencies and disasters.

“The citizens of California are protected by the nation’s most robust mutual aid system,” said Cal OES Fire and Rescue Chief Brian Marshall. “Our local government partners respond daily to mutual aid requests in Cal OES fire engines and even their own fire engines.” 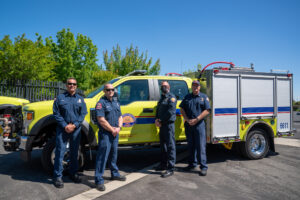 More information on the Cal OES Fire Apparatus Program is available at: https://www.caloes.ca.gov/cal-oes-divisions/fire-rescue/Fleet.