Governor Gavin Newsom appointed Donald O’Keefe as the new Chief of Law Enforcement at Cal OES, building on a distinguished career in law enforcement at both the local and federal level. 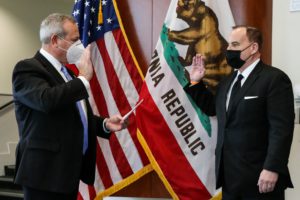 In 2012, O’Keefe was nominated by President Barack Obama to serve as the United States Marshal for the Northern District of California. In this capacity, O’Keefe has been responsible for the management, administration, and direction of U.S. Marshal Service Operations throughout the Northern District of California. His overall responsibilities have included protecting the United States courts and judiciary, criminal investigations, fugitive enforcement, executions of federal court orders, and other law enforcement activities.

Prior to his appointment with the U.S. Marshals Service, O’Keefe served for more than three years as the Police Chief for the city of Half Moon Bay and also spent 27 years with the San Mateo County Sheriff’s Office.

Chief O’Keefe will be replacing outgoing Chief of Law Enforcement Mark Pazin who is retiring. Chief Pazin has worked for Cal OES since 2013 where he has been instrumental in revamping and building an outstanding professional, multi-faceted law enforcement team.