California’s much-needed rain made landfall this week drenching all ends of the state with inches of water. As with any major storm, dangerous conditions follow and this time was no different.

The stream of recent rainfall that soaked the ground caused some roadways in affected areas to flood. Flooding on any street or roadway can be extremely dangerous as water currents are more powerful than they appear.

Today, Santa Barbara County Fire Department resources including a pre-positioned mutual aid asset coordinated by Cal OES, along with California State Parks jumped into action to rescue an individual that was trapped between two creek crossings north of Santa Barbara. Thanks to the heroic efforts of all involved, the individual was safely rescued with no injuries. 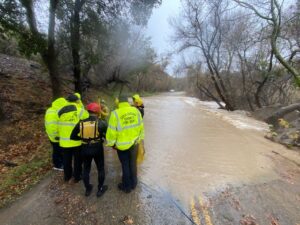 In anticipation of the storm system and impacts, Cal OES coordinated with local public safety agencies to strategically pre-position specialized fire, rescue and public safety resources and personnel in 11 counties, including Santa Barbara.

This is part of an ongoing effort by California’s emergency management and public safety agencies to ensure that critical, life-saving resources are ready and immediately available for deployment in the event of a major mudslide, debris flow, flooding or other emergency caused by significant winter weather.

With rain and snow remaining in the forecast for parts of the state, the public is urged to remain aware of their surrounding conditions, to avoid outdoor activities that may be dangerous and not drive on flooded roadways – TURN AROUND DON’T DROWN. Also, remember to have an emergency plan in place, emergency preparedness kits at home and vehicles full of fuel, sign-up for emergency alerts, listen to authorities and warnings and be prepared to evacuate if necessary.