In 2021, Californians endured some of the most challenging emergencies in state history, including the COVID-19 pandemic, catastrophic wildfires, oil spills and earthquakes.

With climate change continuing to intensify and lengthen the fire season in California, 10 of the 20 largest wildfires in state history have occurred since 2017, with six of those occurring in 2020 alone and 17 occurring since 2000. 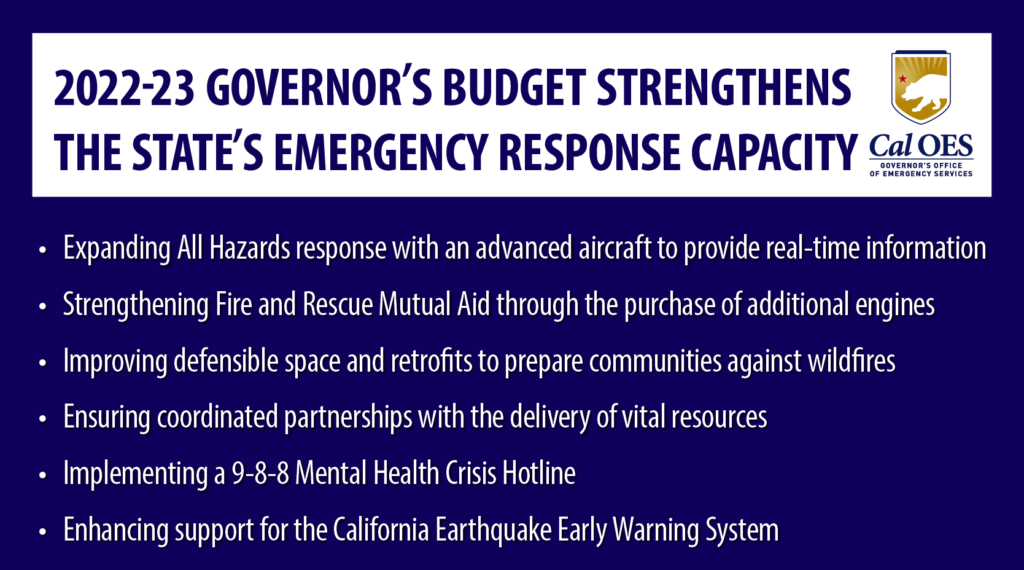 The California Governor’s Office of Emergency Services (Cal OES) serves as the state’s leadership hub during all major emergencies and disasters. This includes responding, directing, and coordinating state and federal resources and mutual aid assets across all regions to support the diverse communities across the state.

Cal OES also supports local jurisdictions and communities through planning and preparedness activities, training, and facilitating the immediate response to an emergency through the longer-term recovery phase. During this process, Cal OES serves as the state’s overall coordinator and agent to secure federal government resources through the Federal Emergency Management Agency.

The budget includes funding for Cal OES to address the more frequent, complicated, and often simultaneous emergencies and disasters involving numerous counties and regions across the state.

The collateral and cascading impacts of California’s disaster events are reflected in the increasingly widespread damages, injuries, loss of lives, and economic disruptions that the state has experienced in recent years.