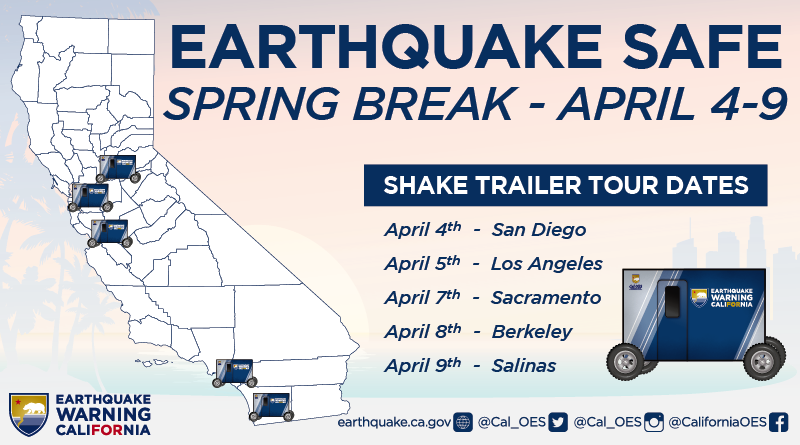 Public invited to learn from experts and experience an earthquake simulator

As families and students venture out for Spring Break, the California Governor’s Office of Emergency Services (Cal OES) is reinforcing the importance of staying safe and being prepared for the next disaster, especially an earthquake.

In recognition of Earthquake Preparedness Month in April, starting on April 4, Cal OES is driving across California with an earthquake simulator and experts on hand to provide California communities information on how to be prepared before an earthquake and what to do during and after one.

“We invite families to join us in recognizing Earthquake Safe Spring Break to learn about the tools and resources they need to stay safe,” said Lori Nezhura, Deputy Director of Planning, Preparedness and Prevention. “Having a plan and emergency kit ready, downloading the MyShake App to get an alert before shaking starts, and protecting yourself if you feel shaking are simple, life-saving steps each of us can do to be ready before an earthquake strikes.”

For Californians who have ever wondered what a large magnitude earthquake might feel and look like, the earthquake simulator produces an earthquake-type intensity of about 25 seconds.