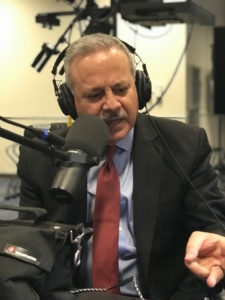 As one of the key architects helping form the state’s Urban Search and Rescue (US&R) Task Forces, Director Ghilarducci highlights the key events that spurred the inception of US&R in California and nationwide.

Comprised of teams of local firefighters specialized in rescue efforts, the eight US&R Task Forces statewide are part of key response efforts to help keep Californians safe during a disaster or emergency.

Click the play buttons to listen to the entire excerpts.

A Brief History Lesson on US&R's Birth in California

Brian Rice: Talk to us about what you saw and how that idea germinated and grew into what it is today.

Mark Ghilarducci: The concern early on was a big earthquake hitting Los Angeles. So, in 1988, I convened subject matter experts locally and internationally to learn what a comprehensive multifaceted technical rescue program could look like.

We looked at programs in France, the United Kingdom, Switzerland, Germany and others that built programs that came out of World War II where they had multiple bombings of buildings. They were knowledgeable and honed in on heavy search and rescue, moving large debris to be able to rescue people.

So, I went there, I met with them, I brought them to California.

Mark Ghilarducci: After working with all these experts, I drafted up a plan and program and asked for funding from California Governor George Deukmejian. The proposal was on his desk for a while, but a couple key events helped spur this program into action.

At first there were hurricanes that hit the East Coast, one of which was Hurricane Andrew, and it decimated the community of Homestead, Florida. Then, Hurricane Hugo followed. The locals did the best they could, but the response operations were dismal.

As we watched the East Coast get hit, something happened here in California – the Loma Prieta earthquake.

At that time, FEMA did not exist. As a nation, we were still caught up in a post-World War II, Cold War-era emergency management construct.

Back then, the Fire Service had “special forces” that actually went in to do complex operations. The federal government provided $2 million in grants for 25 teams across the country. Now, it’s all changed and they’re well-funded. But at the time, that’s how they started the program and California was a huge leader and an advisor in that.

Mark Ghilarducci: Over the past five years, the state has experienced an unprecedented number of ever-complex emergencies and disasters. We had the COVID response, civil unrest, domestic terrorist event, at least 18 fires burning at the same time, with several of them being catastrophic wildfires burning down entire communities.